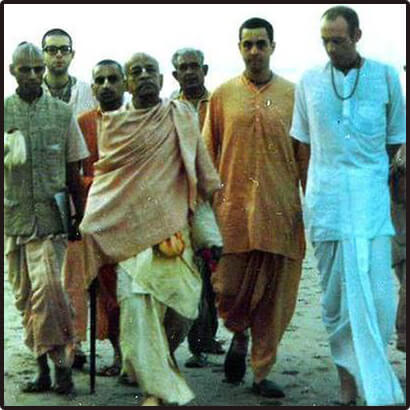 Born in 1949, in the village of Aravade in Maharashtra India, HH Lokanath Swami (born Raghunath Patil) always had an ambition to dedicate his life to serving people, his country and humanity. Bereft of resources, he did not know where to begin. It was while studying Chemistry in Bombay that his life was irrevocably changed.

He daily attended the first 10 day Cross Maidan Pandal Festival in 1971 organised by A.C. Bhaktivedanta Swami Prabhupada, the founder of the International Society for Krishna Consciousness (ISKCON) and his Western disciples.

Although Lokanath Swami did not personally meet Srila Prabhupada at this festival, His Divine Grace’s spiritually elevating discourses and the energetic kirtana by the devotees stole his heart. He could not afford much, but managed to buy some small Srimad-Bhagavatam booklets and several Back to Godhead magazines.

These purchases were what kept him connected to Srila Prabhupada and the devotees during the time that he could not locate them. It seemed that this extraordinary group of people had miraculously appeared and disappeared. It was at the 1972 Hare Krishna Festival that he finally decided to forsake his studies, permanently join ISKCON and move into the temple in Bombay. When his family were unable to locate him, they feared the worst. He had once before left home to join an asarama. On the pretext that his mother was gravely ill, he was asked to come back home to Aravade. After a month of unsuccessful dissuasion to leave ISKCON, he returned to Bombay.

It was in Vrndavan on Gopasatami 1972 that he became an initiated disciple of Srila Prabhupada. He received the sannyasa order from His Divine Grace in December 1975, at the age of 26 years. Lokanath Dasa officially became Lokanath Swami.

One of the most important instructions he received from Srila Prabhupada was to preach Lord Caitanya’s message by organising Padayatra (a walking festival) worldwide in order to realise Caitanya Mahaprabhu’s declaration – “the holy name of Krsna will be preached in every town and village on this earth.” The first leg of the journey was from Vrndavana to Mayapur.

In the course of his Padayatra service, His Holiness travelled on foot to many of the major tirthas and sacred sites of India. 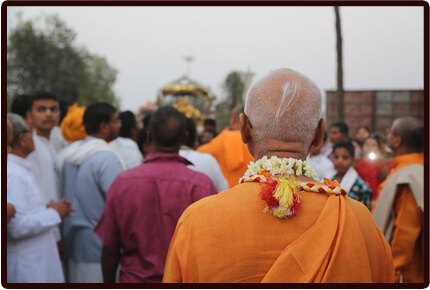 Today Lokanath Swami travels regularly throughout India, preaching mostly in Maharashtra. For the past forty years he has travelled and preached in the major cities and towns and remotest villages of Maharashtra guiding their development and spiritual upliftment. He regularly travels to Europe, Africa and Asia sharing the teachings of Bhakti-yoga. 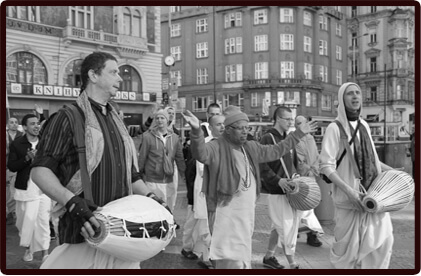 He is well known for his inspiring lectures and kirtanas. In 2006, he took over the World Holy Name Project which is an initiative to increase the events and activities that people can participate in to spread the holy name on this planet. The basic purpose of this World Holy Name Festival is to spread the message of Lord Krishna as well as to impart the teachings of Srila Prabhupada.

Srila Prabhupada was deeply concerned by the education system followed in modern India. He always expressed dissatisfaction on how the current education system is stripping Indians of their priceless heritage of Vedic culture and wisdom With this in mind Lokanath Swami has established the Bhaktivedanta Academy for Spiritual Sciences (BASS) in Noida.

On the auspicious day of Asadi Ekadasi Pandharpur is filled with countless pilgrims. Thousands and thousands of Varkaris take a sanctifying holy bath in the Chandrabhaga River before visiting Lord Vitthala. The lack of proper facilities to get to the river creates great inconvenience. With the construction of Prabhupada Ghat on the banks of the river, Lokanath Swami endeavours to eliminate these difficulties.

He is also the author of many books ranging from the lessons learnt from his personal conversations with his spiritual master (My Prabhupada, In Conversation With Srila Prabhupada) to taking his readers on a visual and spiritual pilgrimage though Vrndavana (Vraja-mandala Darsana). He is one of the initiating Gurus in ISKCON, and has initiated disciples all over the world. He is presently working on several books and various building projects.